The oldest winery in Suisun Valley

When Mario and Lena Carlevaro Lanza moved to Suisun Valley to partner with the Brea brothers at Wooden Valley Winery in 1944, there was not a single grapevine in the valley. "Grapevines are resilient and can grow in poor soil," says Ron Lanza, Mario's grandson and one of the four brothers who run Wooden Valley Winery today.

For years, the winery made wine from grapes grown in Cordelia and Green Valley, areas that were "solid vineyards" until the second half of the 20th century. Lower Green Valley was planted in wine grapes; upper Green Valley was for cherries; and Suisun Valley was reserved for fruit trees. "The growing in the valley was way too good to waste on grapes," Ron said. 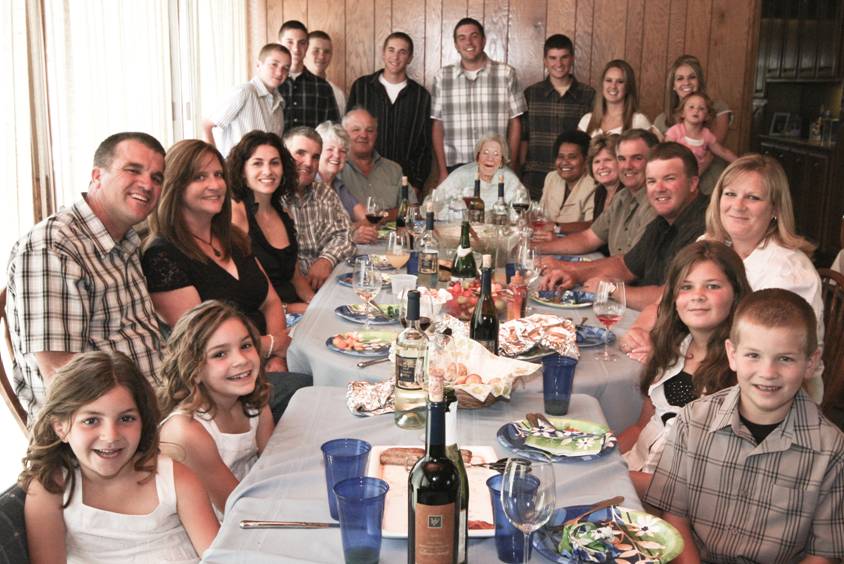 Mario and Lena Lanza purchased the ranch adjacent to Wooden Valley Winery, and in 1955 bought out the Brea brothers to become sole proprietors of the winery. As the economics of fruit changed, the orchards came out and grapes went in. Their son Richard (Chick) became the winemaker in 1960 and delivered wine by the jug and barrel directly to families from Suisun to San Francisco, much like a milkman once delivered dairy. Chick and his wife Adrienne had four boys—Rick, Ron, Larry, and Ken—who run the business today. The family business includes the winery and 300 acres of family-owned vineyards.

On a warm January afternoon, Ron, the spokesperson for the family, gave me a tour of the winery and several vineyards north of the winery where the family grows 40 varietals for amateur winemakers on the East Coast. "Seventy-five percent of our business is selling wine grapes to wineries and home winemakers," said Ron. Only ten percent of their grapes go toward their own wines. Last year 27 truckloads of Lanza grapes left for the East Coast. Among the varietals they grow for home winemakers are Barbera and Sangiovese. The Lanzas wouldn't normally grow these wine grapes in Suisun Valley, but the home winemakers want to make Italian wines, he says.

We drove north of the winery on Suisun Valley Road (formerly Wooden Valley Road where the winery got its name) and turn west on a dirt road with pruned vines on the right and un-pruned vines to the left. Ron pointed out the pruners at work on the far side of the field. His best workers can prune two acres of vines a day. He demonstrates how to snip each spur down to two buds and explains why he chooses to cut one vine down to the nub and leave another. The winter prune is not the only time of year that each plant gets attention. In spring the workers judiciously rub off new shoots, and in July they walk the vineyards again to remove grape bunches and leave two clusters of grapes per shoot to optimize fruit position during maturation. "We're massaging the growth of the vine throughout the season," he said. "You can't do that with a tractor.

Vineyards are manicured landscapes and you need labor. California is a powerful state, but take away labor and you have nothing," he said. Water and labor—two things that always occupy a farmer's mind. 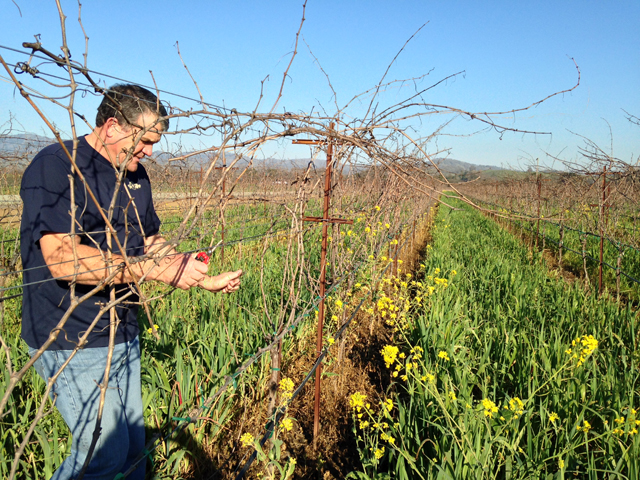 We cross Wooden Valley Road in the truck. Another truck drives by and Ron waves. It's Larry Balestra of Larry's Produce. On the other side of the road Ron shows me a vineyard of Petite Sirah grapes. "Petite Sirah is one of the top varietals of Suisun Valley," he said. They are grown on this end of the valley because they like warm days and cold nights, the same climate shared by great wine regions around the world. Other varieties prefer the cooler, windier south end of the valley.

Back at the winery he shows me the grape de-stemmer that processes 45 tons of harvested grapes an hour; the grape crusher where Rick Lanza crushed 400 tons of grapes last year; the six stainless steel fermenting tanks where grape juice starts its transformation; and the barrel room that holds 500 gallons of wine.

That sounds like a lot of wine, but it's not, according to Ron. "A winery's size is measured in cases. Wooden Valley Winery sells 5,000 cases a year. (Wine Enthusiast says that E. & J. Gallo sells 75 million cases a year in the U.S. alone.) "We're a small winery and try to keep prices low." They sell to local restaurants and grocery stores, which Ron delivers to in his truck much like his father did. The winery also has steady sales through their 1,400 wine club members. Check their website for information on their wine club that Ron says is the most affordable club around: woodenvalley.com

The oldest winery in Suisun Valley is small compared to E. & J. Gallo and the Wagner Family of Wine (which includes Caymus), two wine enterprises that recently put down stakes in Suisun Valley. Gallo bought Winterhawk and Ledgewood, and Caymus bought 260 acres on Cordelia Road for a winemaking facility. "It's bad that we lost Ledgewood, but the presence of Gallo and Caymus will help keep everything in vines and agriculture," said Ron, a grower with deep roots in the valley. "It's good for growers and it's good for ag in Suisun Valley."

(By Aleta George, February 2015 [updated 2018]. Photo of Ron Lanza by Aleta George. All other photos courtesy of Wooden Valley Winery..)