Where the Western bluebirds fly

Last Saturday, the skies over Lynch Canyon Open Space Park were filled with brilliant displays of shape and color as hundreds of kites flew above the annual kite festival.

A short ramble away, another brilliantly colored attraction was flying about its protected habitat. While it may cast a smaller shadow than the car-length Octopi kites, it’s a cause for year-round celebration, and a keystone conservation success.

The Western bluebird is a blue-and-rust colored thrush. The males seem to sparkle where they fly and illuminate where they land. But a complicated background of habitat is needed to bring this beautiful bird into relief; this habitat was at risk of being lost before Lynch Canyon’s permanent protection. 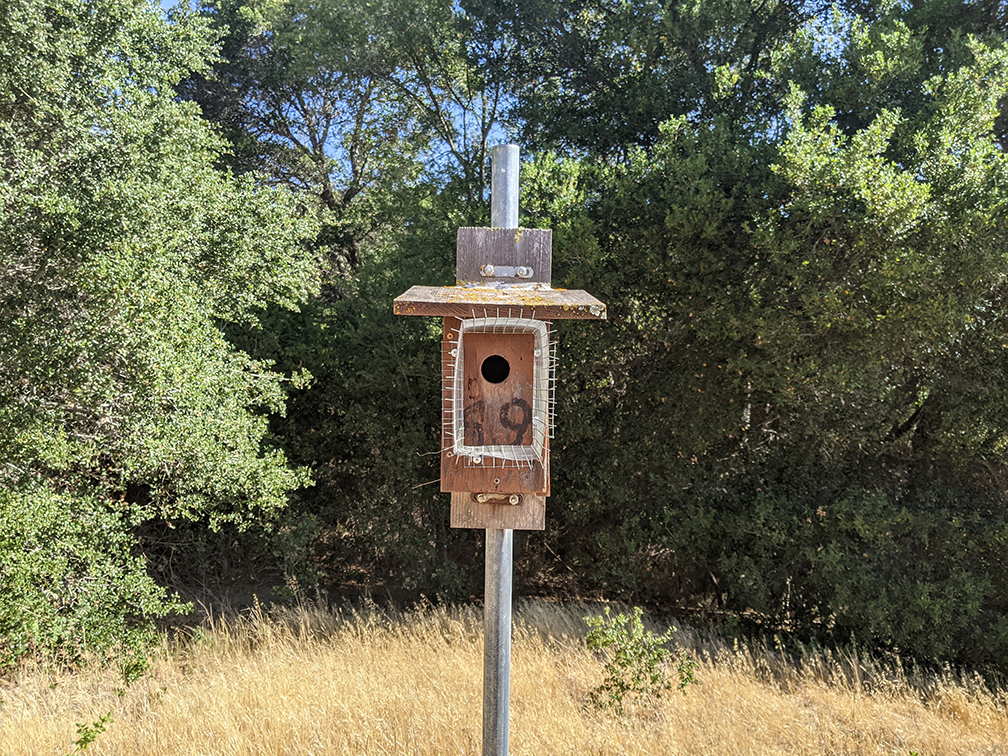 But the story hardly ends there. When spring comes and it’s time for Western bluebirds to prepare a nest, the beaks of these cavity nesters aren’t strong enough to bore a cavity into trees themselves. Western bluebirds rely on the labor of woodpeckers on dead trees, who hack out the holes where the bluebirds can bring their nests and rear their young.

When forests across the state shrink, trees and their limbs stop dying and turning into snags; when the woodpeckers don’t bore enough suitable holes, the birds have nowhere to build nests and rear their young. It’s a story familiar to the Bay Area: there isn’t enough housing stock to go around. If a bough falls overnight, the drying process takes time.

Even in the wild, Western bluebirds need help, and the docents of Lynch Canyon deliver it with care and dedication.
In the scrupulous spreadsheets they keep, the docents of the bird box program are authoring a story of successful repopulation of a beloved species. That story is taking place in a moment of national alarm for avian populations; estimates suggest overall numbers of birds in the United States have dropped by as much as a third. 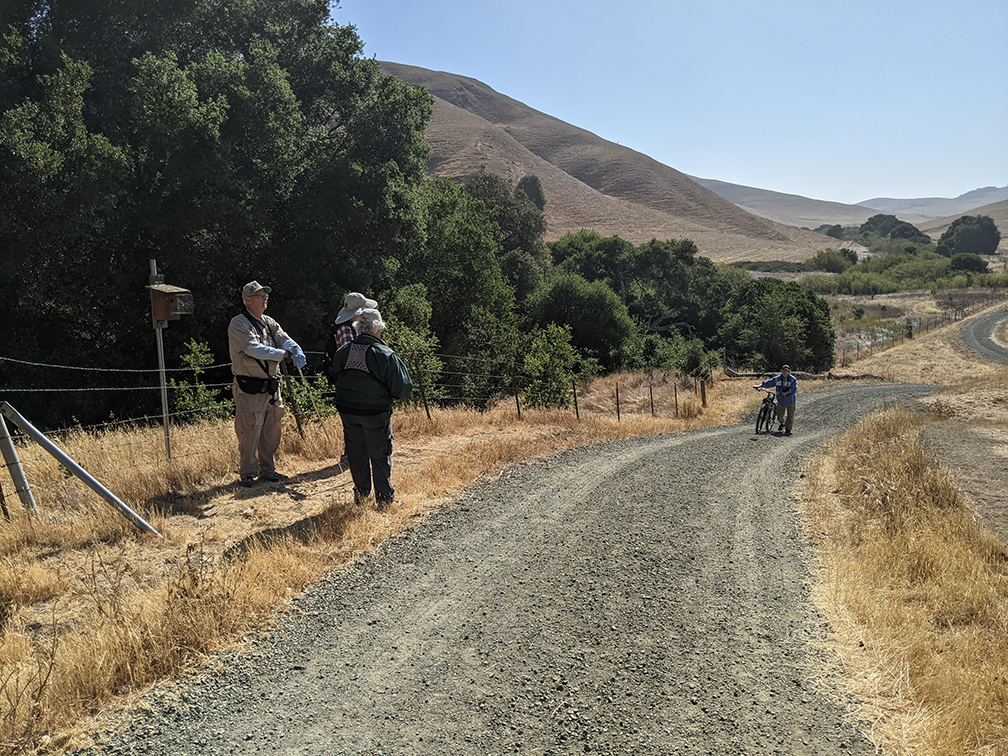 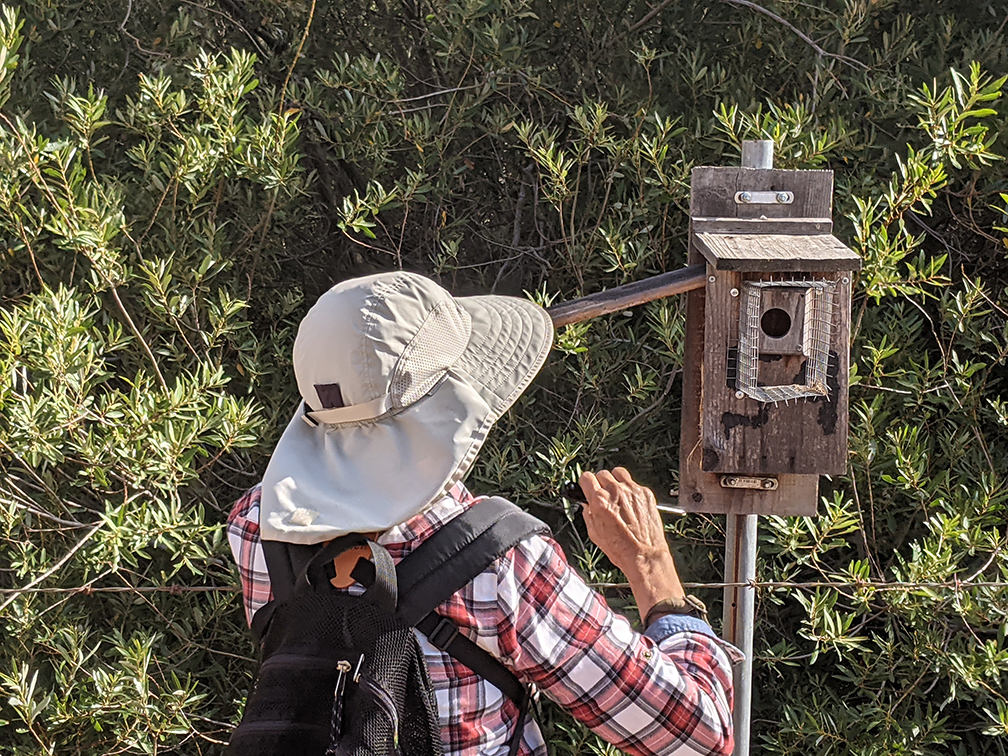 I had the chance to walk with the docents last summer, after the birds had fledged. It was dry and the docents were curious why I was visiting during the least photogenic part of the season. They checked each box and shared their findings.

Box 59 had tree swallow predation and while the nest in it looks good, no birds within
Box 53: A decent spot. Somewhat productive. May be a switcheroo.

They swab the boxes with lye, clear out the wasps, and remove the bird droppings that amount to the messy proof of a successful fledging. They may add a baffle to the post or trim vegetation to make the boxes harder for predators to access. The boxes are made for Bluebirds, but any thrush that resides there is considered a success, including the Ash-throated flycatcher.

“All panels must be closed securely with drywall screws to keep out snakes, raccoons, and other predators,” says Earl Swenerton, the long-term coordinator of volunteer efforts. “I was a docent before there were docents,” says Earl. “I sort of got typecast as a birder. I had a nice bird scope back then.”

Earl has been involved with the bluebird monitoring program for nearly a decade. He recruited a slew of volunteers from the Napa Audubon Society. The groups monitor boxes weekly from March through August. Together they’ve seen birds take their first flight, and they’ve witnessed the chaotic shambles the racoons leave behind when they paw blindly about the nest. 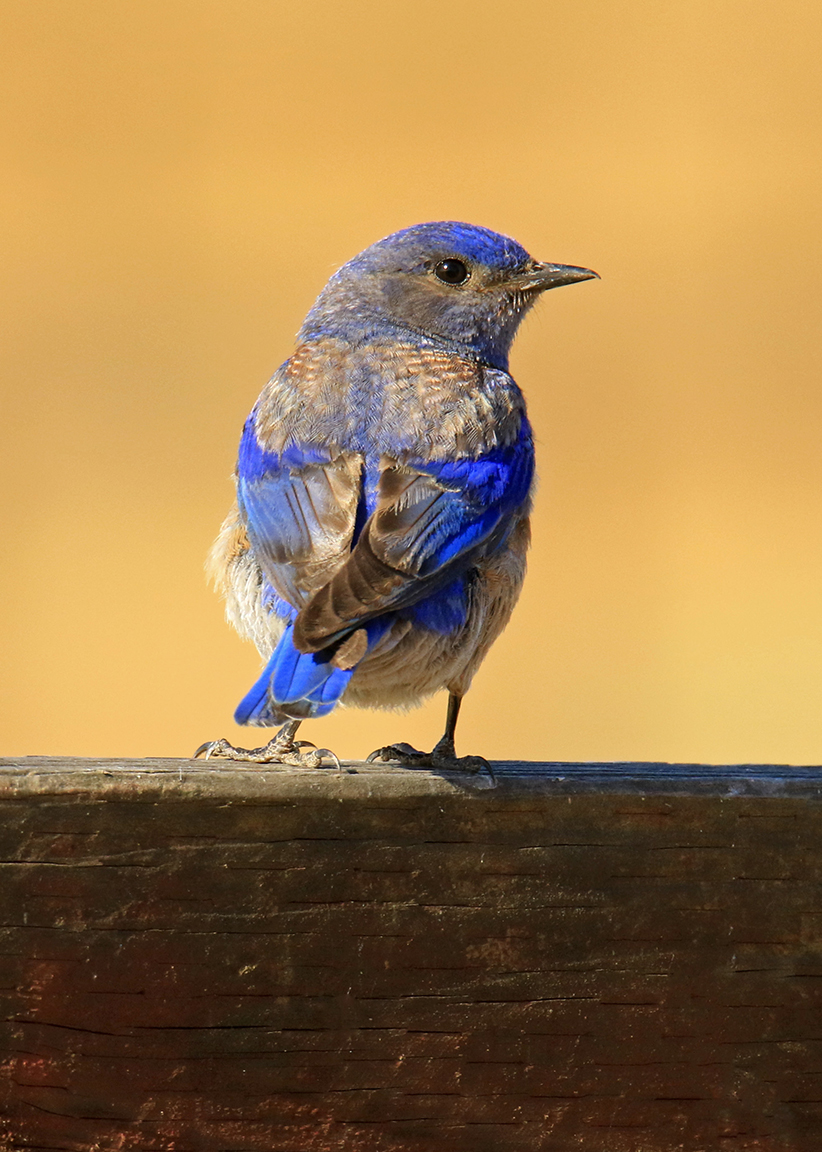 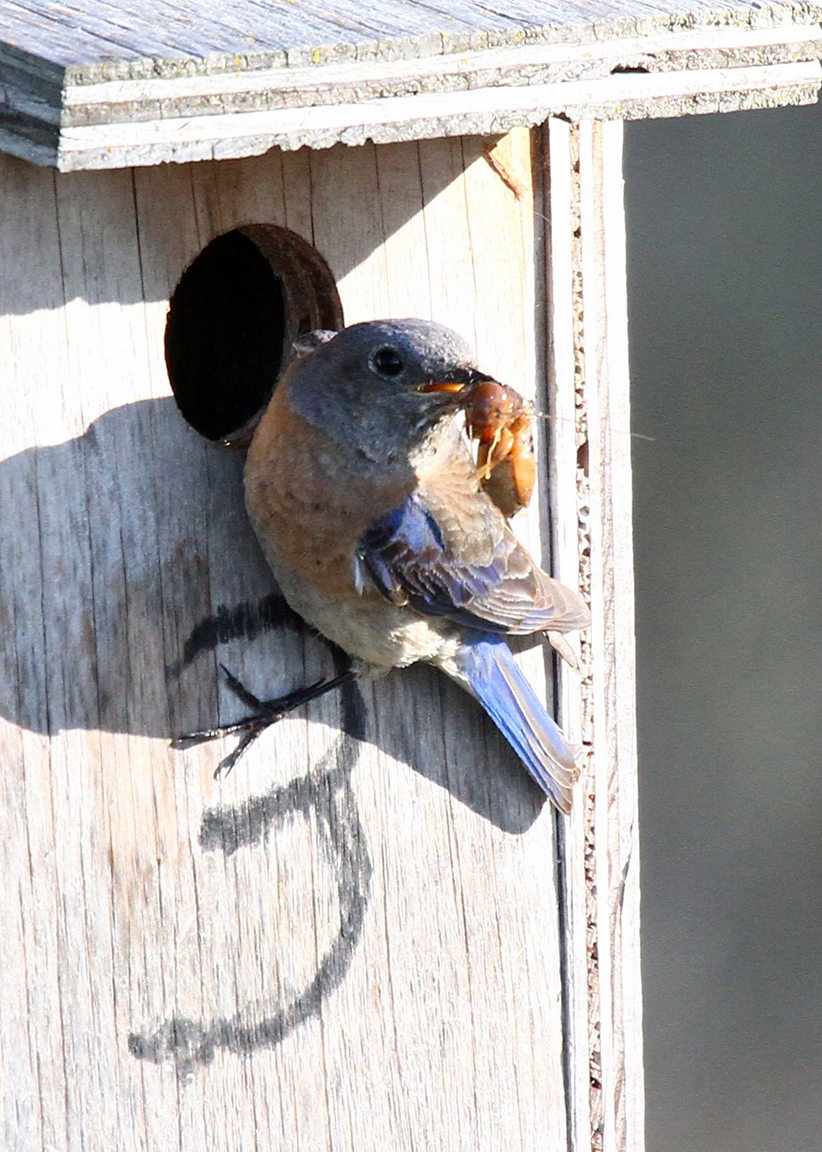 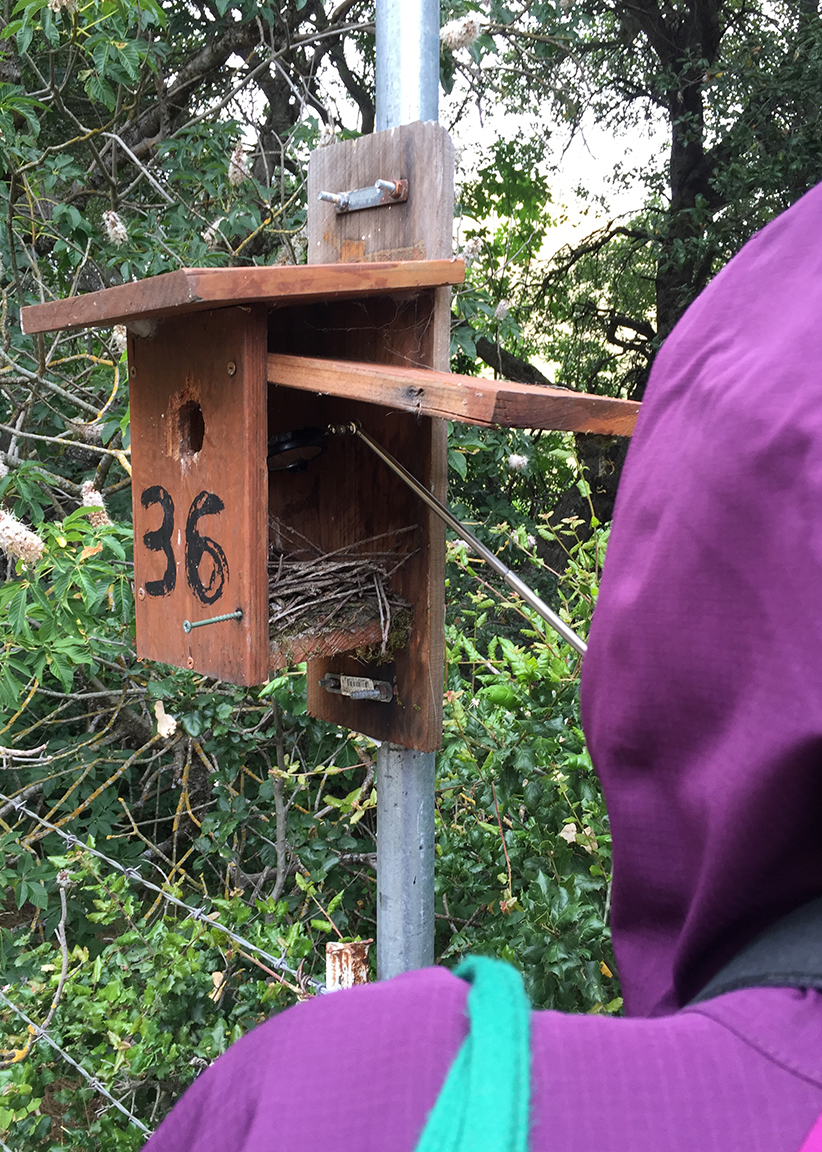 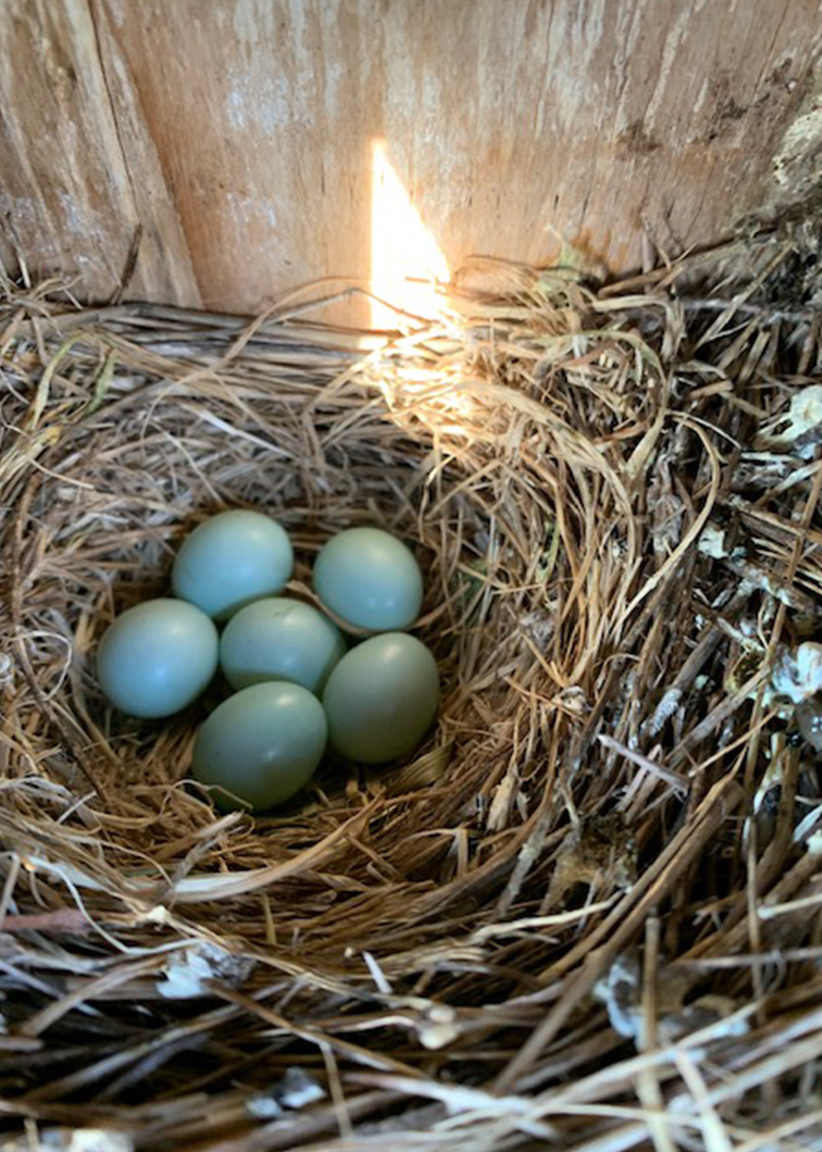 But the Western bluebird monitors know only so much help is allowed before that help resembles interference. On a good year, with proper weather conditions and steady meals of bugs, half the chicks in the wild won’t make it. Respecting this balance means either accepting nature’s way or steeling oneself for heartbreak. The volunteers I met had all navigated this, but they were candid that it’s not always easy. And the pictures of the fledging birds that docents capture still inspire awe and affection.

While the protocol for fixing up and protecting boxes is well-established, other challenges are beyond the scope of a volunteer project. Drought is the foremost concern; hot, dry years bring fledgling numbers down, and those years have no end in sight.

But no matter what the future holds for the Western bluebirds, they can depend on passionate, dedicated docents working in habitat you’ve helped protect forever.

Interested in volunteering at Lynch Canyon or other sites? Reach out to Di Holokahi, at di@solanolandtrust.org