The Master Sergeant in the Tractor Shed

Home / eVistas / The Master Sergeant in the Tractor Shed

A salute to Virgil Sellers, a volunteer of the first rank

The legacy of veterans is everywhere at Rush Ranch.

For over thirty years, Rush Ranch has provided some of the most disciplined, civic-minded citizens of Solano County with an arena for their problem solving, and material support for their projects.

And though he may be too humble to say it, nobody embodies this spirit more than retired Master Sergeant Virgil Sellers, a Solano Land Trust volunteer since 1991.

The presence of veterans here shouldn’t surprise anyone. Rush Ranch is a nine-mile drive from Travis Air Force Base, the largest employer in Solano County and a famed “Gateway to the Pacific” that handles more cargo flights than any other air terminal in the United States. Lockheed C-5 Galaxies soar over Rush Ranch with the same iconic regularity as red-tailed hawks.

When those C-5s take off on days Virgil is working, they fly over a man with a deep knowledge of what it takes to be up there as a veteran with 26 bombing campaigns and 10,000 hours of logged flights. They also soar over a collection of structures and machines that Virgil has refurbished and improved throughout the years. These projects have kept Virgil learning and collaborating while improving the space for all. 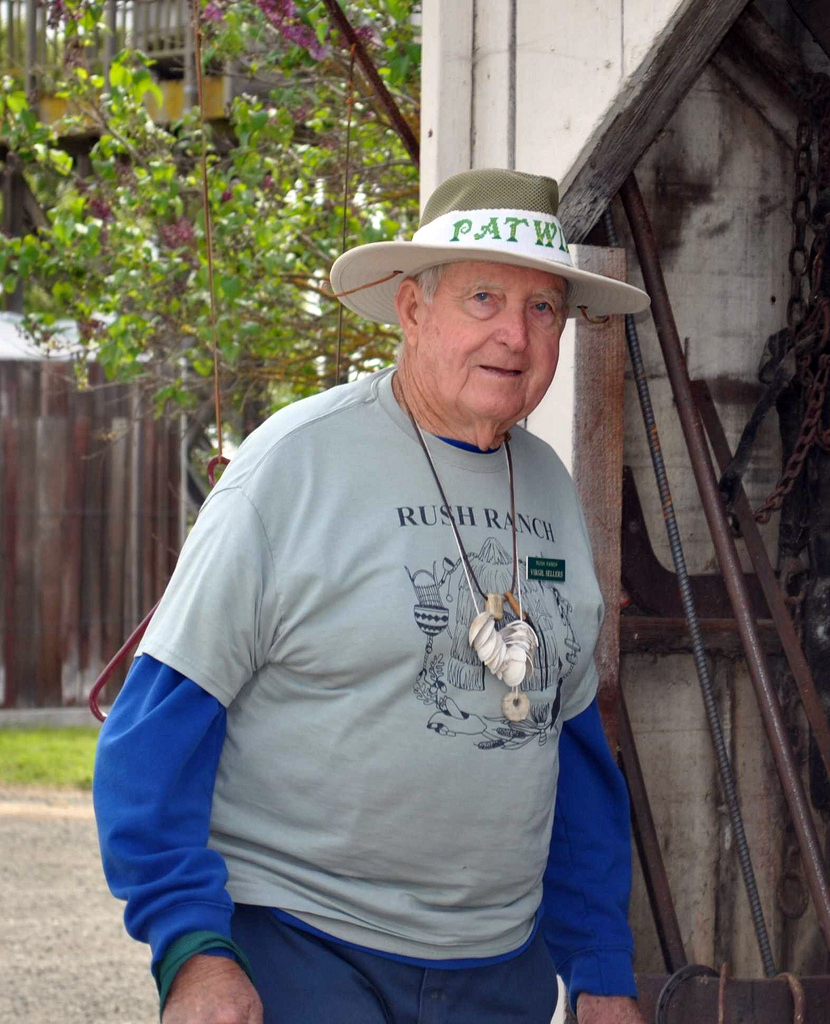 Travis Air Force Base is what brought him to the area, but the community and a love for the land kept him here. And Solano Land Trust has kept him busy, which is no mean feat.

On the day we spoke, Virgil was helping field operations manager Jordan Knippenberg refurbish an old pressure tank and upcycle it into an outdoor fireplace for the property. They were tinkering in a building near the barn I had considered Virgil’s workshop. He was quick to correct this notion.

“Well, we used to call it the tractor shed,” Virgil says. “So, we still call it that.”

He sat on a weathered chair beneath an extended roof he’d built, not far from an oak tree he’d help to plant. A C-5 flew overhead, drowning out the cooing doves. He had time for some reminiscing on the path that brought him from there to here.

Flight path of a veteran

Better than telling the age of this energetic soul, we’ll relate that he’s been married for sixty-nine-years. He also has a son who is retired.

He began life as one of thirteen children in rural Indiana. Seven of the males in his family joined the services, but Virgil is quick to add only three of them served over ten years.

In high school he was a grease monkey, restoring multiple engines before graduating. He thought he’d put his mechanical talents to work in the army’s motor pool. But airplane mechanics were more needed at the time, and he tested into that route. The journey to a place on these million-dollar technical marvels started humbly in San Antonio, Texas, where he spent nights sleeping in a tent and mornings relieving himself in a ditch.

He continued specialized training on B-29s in Glendale, CA, where he met his future wife, Pat.

Another engineering school stint in Illinois followed, then he deployed to Korea. “They flew us like mad,” he says. He participated in 26 campaigns against the North Koreans as a Boeing B-29 flight engineer.

After Korea, Virgil was encouraged by the military to select three potential bases to relocate. He picked three places on the East Coast. 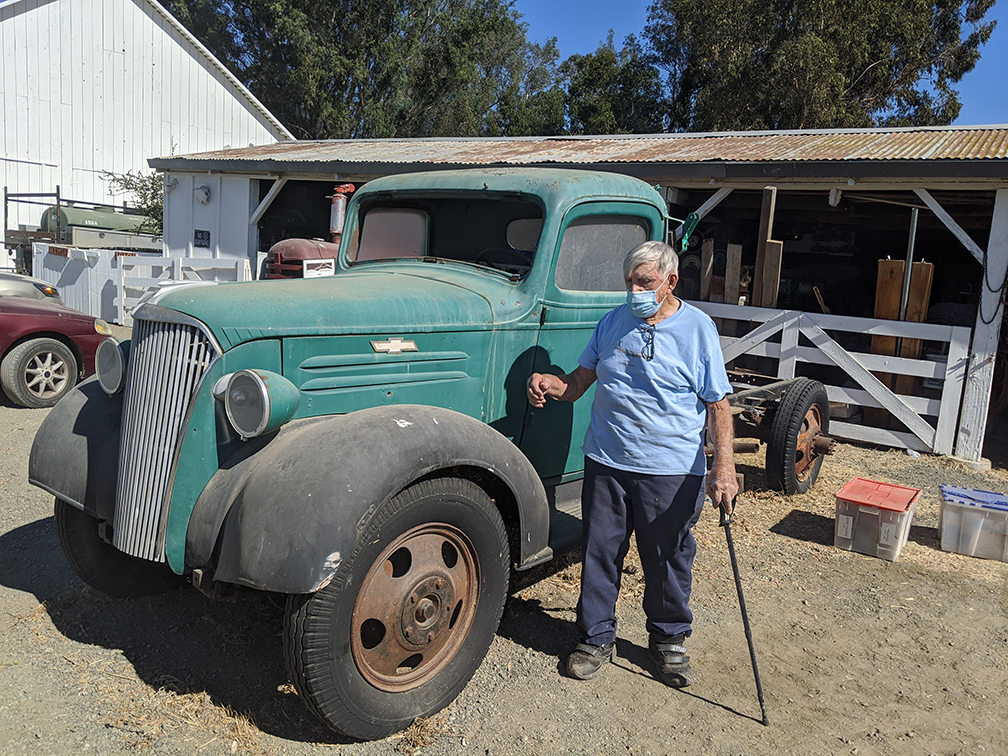 Virgil Stands before the 1937 Chevy flatbed he spruced up.
He installed the wooden fender pieces. 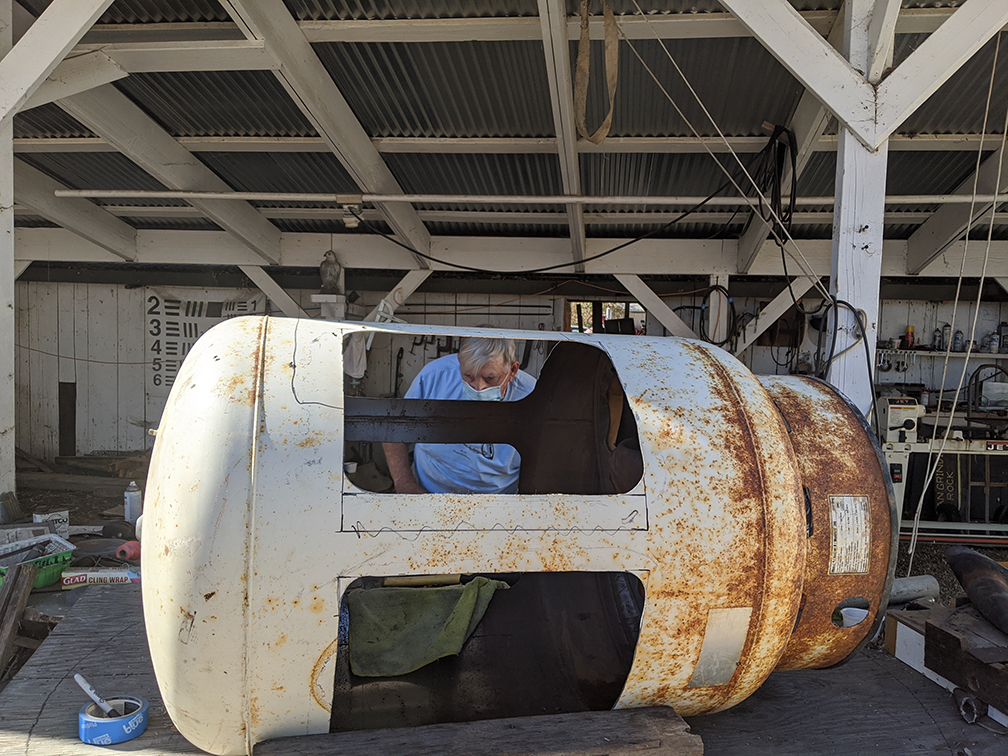 Virgil as seen through the pressure tank
he is converting into a fire pit.

The military sent him to Mountain Home, Idaho.

The first day there he drove his young wife across the one-street town. Before they reached the end of the street, the young woman from prosperous and bustling Glendale began to cry.

In Idaho, he worked on Boeing B-47s. He went into the Strategic Air Command, which flew preparatory and practice missions in events of actions by or against the Soviet Union, the mountainous terrain of the west standing in for the Caucuses. They refueled plane to plane mid-flight, simulated dodges of anti-aircraft gunning, and negotiated the physics of dropping a “Fat Boy” bomb full of concrete into the Salton Sea.

His favorite flight from this time involved taking the National War College—a congregation of high-ranking officials in the Army and State Department—on an around-the-globe flight, stopping at civilian airports across Asia, and catering to the distinct needs of fancy superiors—a former ambassador to Poland required a cozy build-out on the plane and a steady supply of English teas.

The worst flights were the evacuations of the wounded from Vietnam.

Virgil and Pat stayed ten years in Idaho. He enjoyed hunting and Pat liked to fish, and both relished the company of other base families. He got to work on Douglas C-124s—nicknamed “Old Shaky”—which he describes as a “baby brother to the C-5s you see flying over here all the time.”

Still, the move to the comparative metropolis of Fairfield, CA, and Travis Air Force Base was a welcome one. Virgil worked at the base, opened a cabinetry shop on State Street, hunted in the Sierras, and volunteered at the on-base museum. 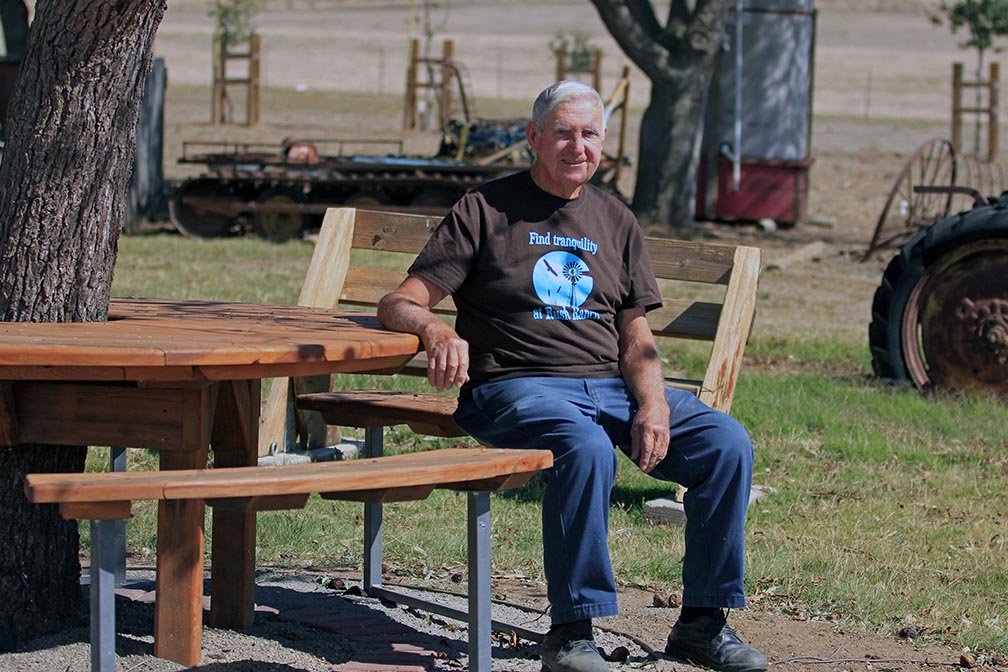 Finding a home at Rush Ranch

Virgil first visited Rush Ranch in 1991. He saw an ad in the paper and joined a wildflower walk given by the Rush Ranch Educational Council, a nonprofit organization that continues to provide educational outreach for the ranch. While there, he noticed the barn was sinking more than it should’ve been, and helpfully ingratiated himself into the discussion of how to fix it.

With funding from the State Coastal Conservancy for materials, Virgil and a crew of volunteers showed up every Saturday for a full day of labor and an evening of cooking and merrymaking scored by the harmonica and guitar work of fellow volunteers. “We had real musicians in the organization then.” The rigors of the work shrunk the volunteer crew from twenty to twelve.

“The best times I had out here,” Virgil recalls.

The crew jacked up the barn, installed pressurized posts, and re-shingled the roofs so owls couldn’t wedge their way in. From there, his projects with the Rush Ranch Educational Council continued, including teaching himself how to operate the blacksmith shop and scheduling monthly demonstrations. He was also a docent and board member with the Rush Ranch Educational Council for years, providing guidance on which projects the Council should fund and pursue.

Virgil is quick to credit John Takeuchi and Ken Poerner as veterans he met early in his time at Rush Ranch. Their presence made him feel he could make a purposeful contribution to this place, while continuing the sense of camaraderie the service instilled.

November is the time of year to remember Solano County is military country, and consider the role land trusts can play fostering community for service people, veterans, and their families; the tawny hills and sprawling marshes around Travis may not have Officer and a Gentleman or a Top Gun star-making moment, but it is a defining part of what makes our community strong. And at Rush Ranch, it’s part of what’s keeping things picturesque, inviting, and intact.

It means everything that people like Virgil, John, and Ken have found in Rush Ranch a venue worthy of their talents and their time.

All we can do is strive to be worthy of them.