Science and delight at Jepson Prairie

"The only way to see them is to sit completely still for 20 or 30 minutes. If you move at all, they freeze and blend into the vegetation," she said of the elusive metallic-green beetle she eventually saw on the edge of Olcott Lake at Jepson Prairie. 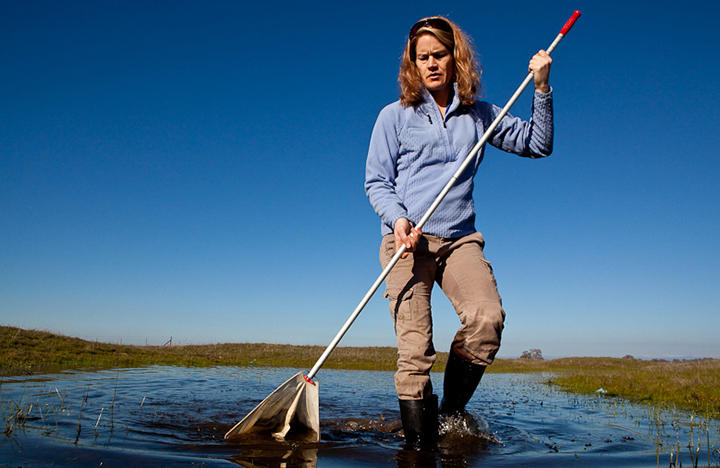 Jaymee Marty on the prairie

Jaymee spent a lot of her time at Jepson Prairie from 2000 to 2012 when she worked for The Nature Conservancy, which still holds and monitors the conservation agreement on the property. “Jepson is one of those rare spots in the valley that has remained relatively untouched over time. It gives us a sense of what vernal pool grasslands looked like historically,” she said.

A prairie in time

Jepson Prairie Preserve is one of the last remaining vernal pool habitats and native bunchgrass prairies in California, a unique ecosystem of pools that once filled the Central Valley in winter and spring, and which have since been developed or converted to agriculture. The surviving vernal pools, such as the 93-acre Olcott Lake at Jepson Prairie, attract scientists and researchers from around the world.

The Preserve is named for Willis Linn Jepson, a world-renowned botanist, conservationist, founding member of the Sierra Club, and Solano County native. The Nature Conservancy bought the property in 1980 and transferred it to Solano Land Trust in 1997. It is part of the University of California Natural Reserve System (UCNRS), and recognized as a National Natural Landmark by the National Park Service.

“When Willis Linn Jepson saw the prairie for the first time in 1892, it blew him away,” said UCNRS’s Shorty Boucher, who has managed the UC Natural Reserve System for nearly 20 years. Although she has recently retired, she is on recall and works part-time managing research efforts for Jepson. “Jepson Prairie is esthetically spectacular, and I can’t overstate the conservation value of the place,” she said.

Shorty has a doctorate in plant ecology, yet defers to Carol Witham and Kate Mawdsley, who she claims, know the most about the flora and fauna out there. 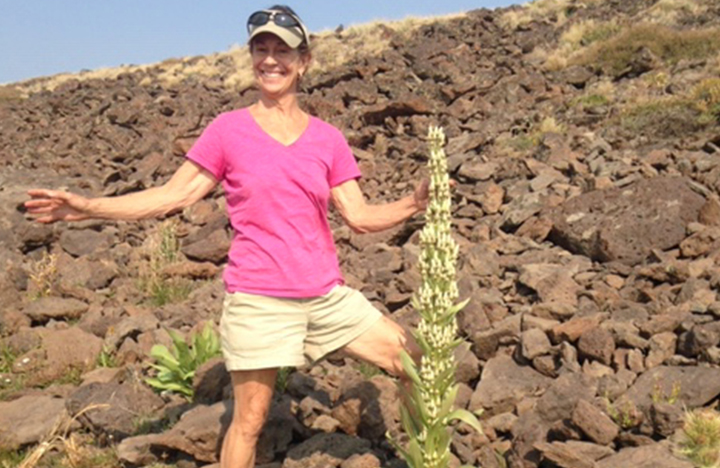 Shorty Boucher in the field 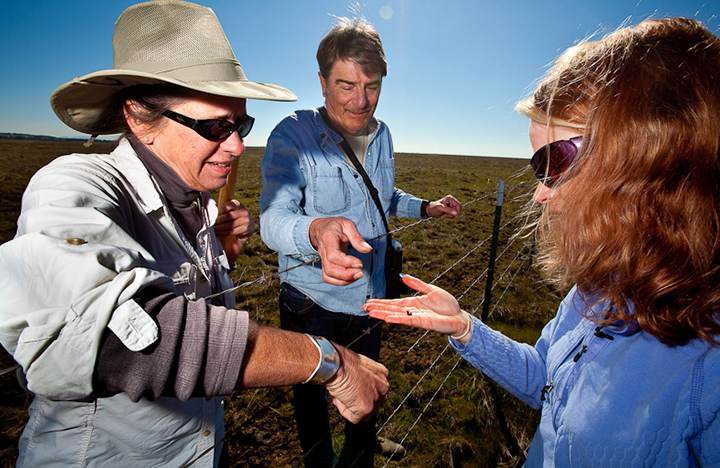 Lifelong love for flowers and science

Carol Witham became a volunteer docent at Jepson Prairie in 1987. She has always loved flowers, but without many jobs for women in botany at the time she went to UC Davis, she studied chemistry instead. After 30 years of professional workshops and self-education, she is considered a leader in vernal pool science.

Carol is leading an effort to re-establish endangered Solano grass in Olcott Lake, last seen there in 1993 when only four plants were spotted. Carol received permission to gather seeds near UC Davis, and plant them at Jepson. At last count, there were 114 plants in Olcott Lake. “That’s better than zero,” she said. “The whole idea is to get enough of a seed bank going so that it persists on its own.”

The fourth, but not least, dedicated Jepson rockstar is Kate Mawdsley. Kate, who started as a docent around the same time as Carol, is a retired librarian from UC Davis. She has loved and studied wildflowers since she was a girl, and has volunteered as the coordinator for Jepson Prairie docents since 1992. “I particularly enjoy getting to know a place well. Why do we love our brothers and sisters? Because we know them so well,” she said. 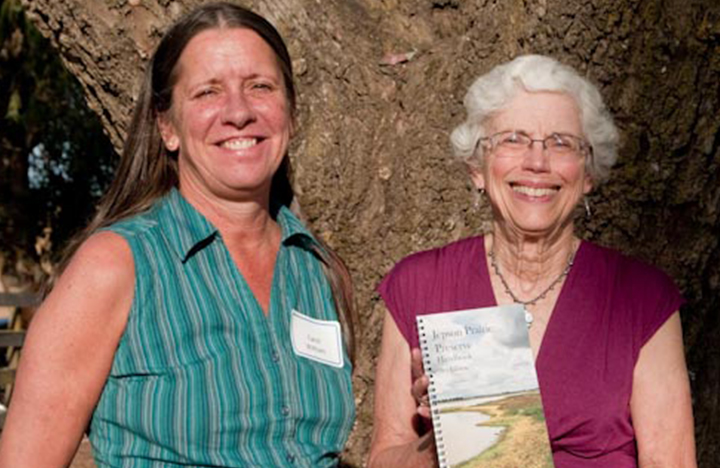 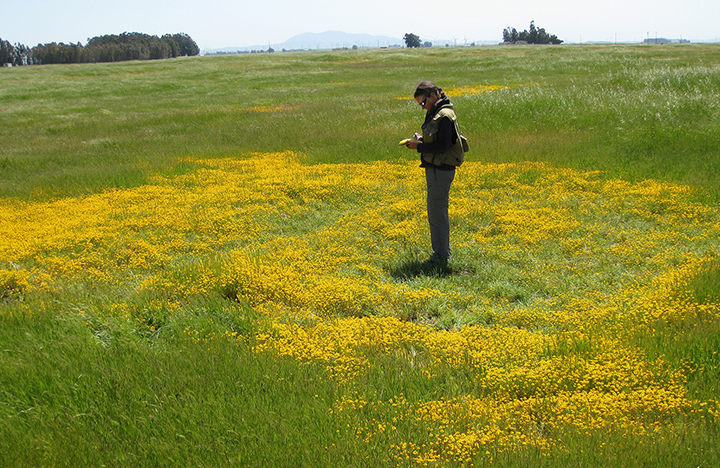 Carol Witham in a field of gold

The newest female scientist to bring her expertise and passion to the prairie is Jasmine Westbrook, Solano Land Trust’s project manager. Shorty is one of many docents who has appreciated Jasmine’s approach. “She listens. She didn’t walk in with a big stick on the first day,” said Shorty, who was one of the few women working in the Reserve system when she started. Now women dominate the field of botany, and Shorty thinks that change has improved collaboration, diplomacy, decision making, and an openness to new ideas.

For her part, Jasmine is thrilled to be working with, and learning from, Jaymee, Carol, Shorty, and Kate. “These women really are pioneers who have inspired later generations of scientists, me included. I am lucky to be working with these knowledgeable and dedicated women. How many people get the opportunity to work with their role models?” 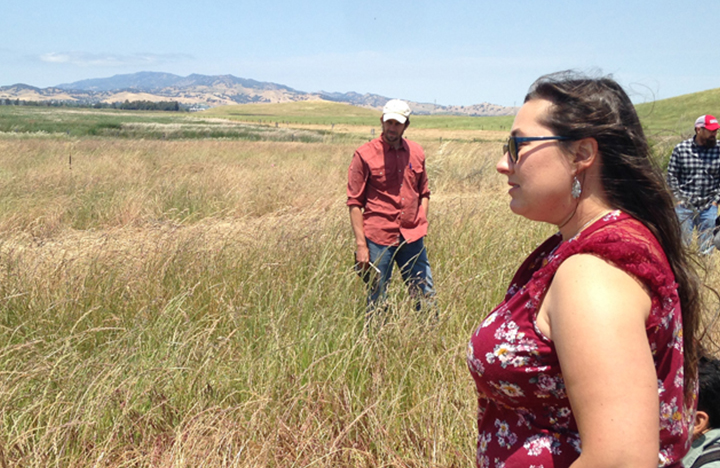 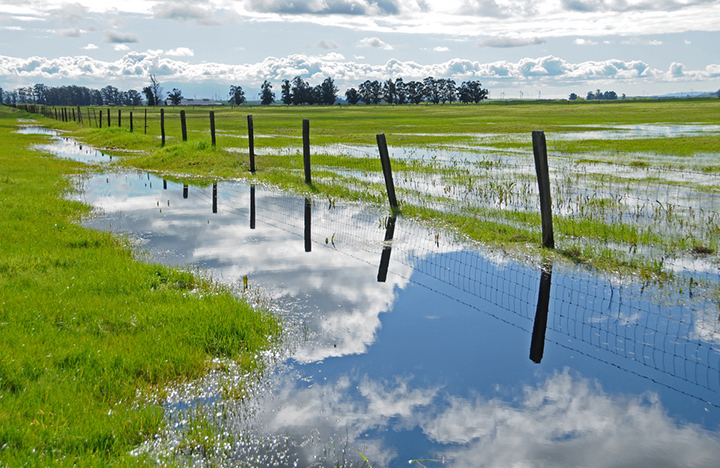 Solano Land Trust appreciates all the passionate scientists and researchers who have worked, and continue to work, at Jepson Prairie. Your support of Solano Land Trust encourages sound science, academic excellence, and passionate self-education at a remarkable California place where studying flowers on your hands and knees is an enjoyable pastime.

Starting on Saturday, March 9, docent-led tours are on Saturdays and Sundays until Mother’s Day. Come see for yourself the brief season of exploding life at Jepson. For group tours, please contact Kate at wfm-kfm@pacbell.net

After years of planning, Solano Land Trust and the Jepson Prairie docents are excited to have broken ground on improvements to the Jepson Prairie visitor area. Changes will include a larger parking area with an ADA-approved parking space, a new group seating area, and permanent signs for the self-guided trail and the entrance. Want to be involved? Join SLT staff and Jepson Prairie docents to install new benches at a volunteer day on Friday, March 15!  Solano Land Trust is raising funds for these improvements now. To help, please contact Michelle at michelle@solanolandtrust.org