Protecting the waters of Putah Creek

A Streamkeeper at the Putah Creek Council for twenty years, Rich Marovich has been dealing with gigantic versions of the challenges that Lynch Creek presents in miniature, and he has seen how conservation agreements help make restoration projects better connected and more successful.

Putah Creek has come a long way since major sections of the creek dried up in the 1980s. Following the creation of Putah Creek Accord—a community and science-based agreement to protect and improve the health of the ecosystem—major projects have been carried out to restore Putah Creek’s natural spikes and ebbs. This has brought about a promising era of rejuvenation for the eighty-five-mile waterway that wends through some of California’s most fertile farmlands.

“Putah Creek was used as a drainage ditch by the district and extensively mined for gravel,” says Rich. “Big depressions at the floor of the creek became mile-long pools. The excess surface area receives solar radiation along the water, which is bad for native fish. There’s imperceptible flow velocity. Excess width makes it so you can’t have shade over the water.” 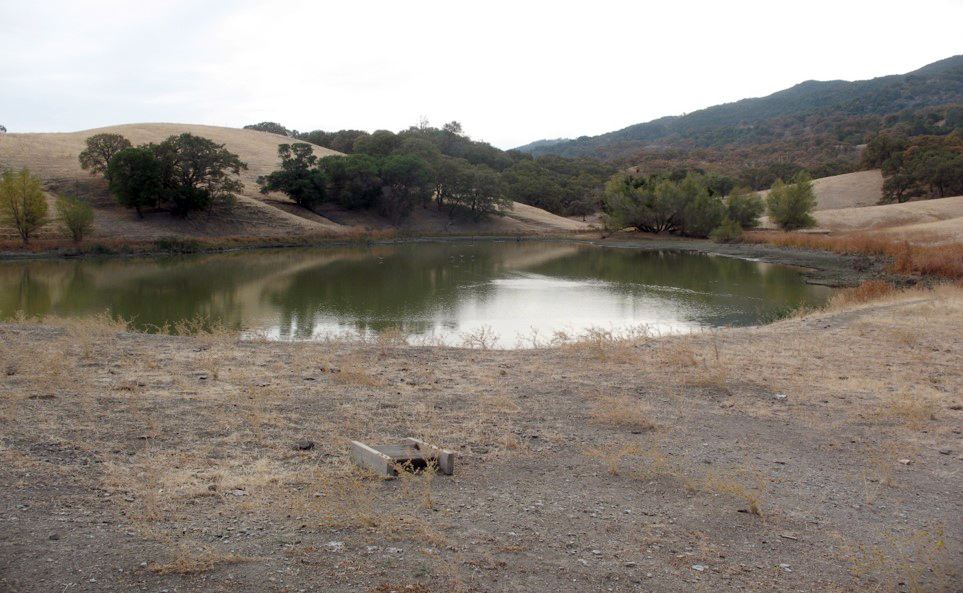 “It all adds up to lousy aquatic habitat,” he says. “In spite of this, Putah Creek has every focal species of the riparian habitat. We have a Chinook Salmon population that peaked at 1,700 fish in 2017.”

When working on a creek with a patchwork of private properties, conservation agreements help with monitoring projects and observing the impacts of restoration on a wider scale.

“Agreements are a magnet for funding because it gives you site control,” says Rich. “They assure the funder that, after the three-year term of a typical grant, we can still take care of the site.”

Several properties conserved with Solano Land Trust conservation agreements border Putah Creek. Other properties touch its tributaries, such as Pleasants Creek, which Rich says is downcut by twenty feet because of erosion, and which could be vulnerable to mudflows from fire debris after heavy rains.

Barbara Martell Comfort lives in the hot dry Pleasants Valley on land that has been farmed and ranched by her family since 1850.

She grew up between the property and a home in San Francisco, and attended Stanford at a time when the South Bay was still full of rolling orchards and farms. Concerned with the loss of irreplaceable land, Barbara placed a conservation agreement on over five hundred acres of her property, The Martell Ranch, in 2004.

“We in Solano County are the next in the multiple concentric circles, if you will, out from the TransAmerica tower in San Francisco in terms of developing,” says Barbara. “There’s enormous pressure to develop pretty much everything. And that’s unfortunate because a lot of our richest and most productive lands have already been covered over.”

“Because of the microclimates in our county and the variety of soils and terrains, we have a pretty unique chunk of ground,” says Barbara. (The whole valley floor of her property is Class A Soils.)

“One thing that the valley doesn’t have is a lot of water availability,” Barbara says. “We are fortunate on the property that we don’t have that problem.”

Her property touches Miller Creek and Pleasants Creek, where riprap has been installed to slow erosion. Her property also includes three manufactured ponds, installed over seventy years ago, and now treated like a natural feature of the land by livestock and wildlife.

“The ponds are wonderful for livestock and fire suppression and they are good for the senses,” she says. “Water is life. It’s not something to be wasted or looked at lightly. Without water, you’re pretty well…”

Like so many in our region, Barbara’s focus was on a different of the four Classical elements on August 17th, when the LNU Lightning Complex fires began.

“Our game cameras captured some remarkable images the afternoon the fire started. Animals of course sense that there’s danger coming. And there were lightning strikes in the third canyon. So the game camera captured bobcats. It captured a bear. There was a steady stream of creatures coming out of that canyon.”

Tragically, when the fire came through the ranch it burned down an olive grove that had been planted in the nineteenth century.

“That olive grove had never in 133 years had a poison, a pesticide, or a contaminant of any kind touch the trees or the ground they grew in,” Barbara says. “I think it’s the only grove in California with any age on it that had its provenance. But it’s history now.”

But among the stress, she has found solace in the pastoral beauty of water, wildlife, and a landscape where spring still brings, as she puts it, “a thousand shades of green.”

Eleven percent of Solano County is surface water. Sixty percent of Solano County’s land is agricultural. Each land protected by a conservation agreement is distinct, and the watersheds on each property serve different roles. Just as it takes many forms of conserved land to maximize land’s benefits, streams, springs, and ponds of all sizes matter greatly and deserve protection.

It’s said no one steps in the same river twice. But unless we work to protect local watersheds from being dried up, drained, or built over, they may all end up looking the same one day.