Citizen Scientists give a leg up to California red-legged frogs

On a cool summer night in August, a group of citizen scientists joined Solano Land Trust staff at Vallejo Swett Ranch for a very important purpose: to count frogs. The count supports a project designed to give California red-legged frogs a fighting chance in their bout with non-native American bullfrogs.

After the group walked a mile in the soft, dusk light, they talked in hushed voices as they approached a pond. Stewardship coordinator Ryan Lewis had already shown the group pictures and given instructions on how to use their flashlights and binoculars for a nighttime survey technique that reflects the “eye shine” of the frogs. With flashlights held close to their eyes, the group searched the pond, reeds, and bank for amphibians. 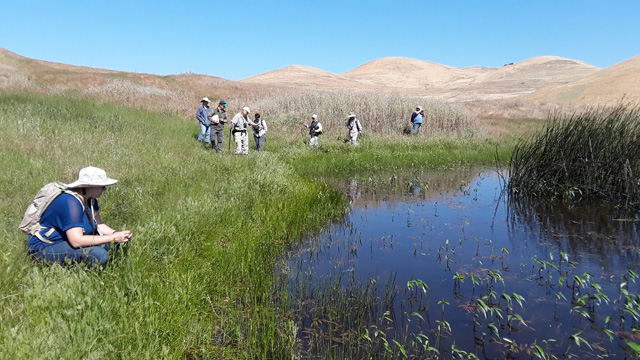 Amphibians sensitive to their environment

This survey is part of a much larger effort by Solano Land Trust to protect and monitor the CA red-legged frog, which is designated endangered by the State of California and listed as threatened by the federal government. Amphibians serve as the proverbial canaries in the coal mine for wildlife given that they are particularly sensitive to habitat degradation. Solano Land Trust is trying to give these native frogs a fighting chance against one of their biggest enemies, the American bullfrog.

Red-legged frogs are iconic Californians. The species is adapted to our dry, arid climate, and is easily identified by two prominent ridges on its back. They’re also famous! They are what launched Mark Twain’s career in 1865 when he featured them in “The Celebrated Jumping Frog of Calaveras County.”

While it may seem that frogs of all kinds should be able to share a pond just fine, an adult bullfrog can be three times the size of an adult red-legged frog. The bullfrog, originally from the humid forests of the Eastern States, has invaded our dry, Mediterranean climate. Not only do they out-compete the red-legged frog for food and habitat, they also consume them. Yep, frogs do eat frogs.

Our western hills of home

The western hills of Solano County have been grazed by livestock for at least a century. Wildlife has adapted or declined due to an increase in non-native annual grasses, the removal of trees and shrubs, and changes to water sources. To extend the grazing season, ranchers have dug shallow stock ponds and dammed streams throughout the hills to store water for cattle.

Several stock ponds on our properties are spring-fed and don’t dry up during the summer most years. These ponds have become especially important to amphibian critters, including the red-legged frogs. Unfortunately, the stock ponds also act as hosts to the enormous invasive bullfrog. To ensure the continued survival of the threatened frogs at Vallejo Swett Ranch, Solano Land Trust periodically drains one of the larger stock ponds in late summer, waiting to ensure that red-legged frog tadpoles have transformed into air-breathing adult frogs. As the pond shrinks, the slower-growing bullfrog tadpoles become easy prey for birds and other predators.

If the CA red-legged frogs were to disappear from our ponds, they may never populate them again. The good news is that this year’s monitoring found red-legged frog tadpoles in the spring and juveniles and adults in August, meaning there was likely a net-gain in the local population. The most recent survey detected no bullfrog larvae, meaning our pond-draining approach is working. This is good news for our red-legged friends!

Solano Land Trust has four properties in the western side of our county. King-Swett, Eastern Swett, Vallejo Swett and Lynch Canyon are all considered critical habitat for CA red-legged frogs. With your support, and our wonderful volunteers, Solano Land Trust provides a safe home for these frogs to increase their population. 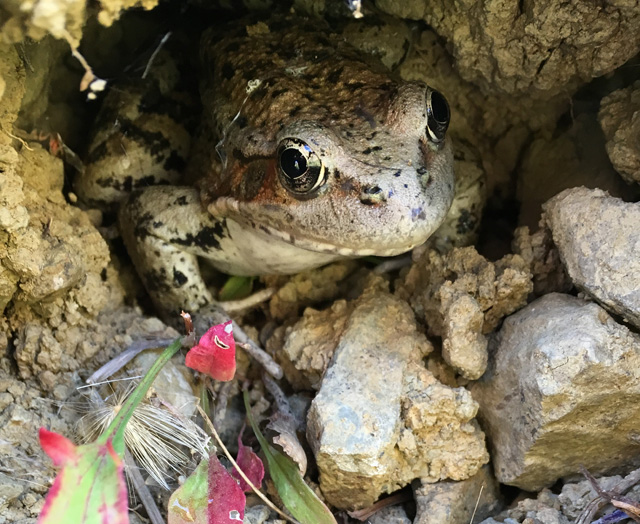 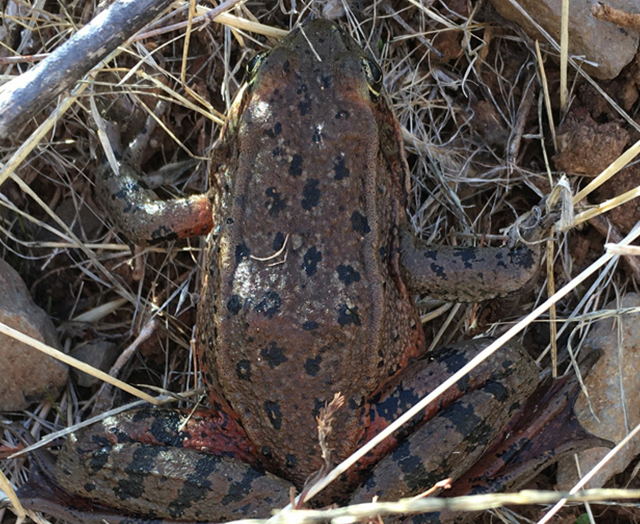