We talk often of permanence at Solano Land Trust. Of protections made forever. Of land saved in perpetuity.

On the first property conserved by an agreement with Solano Land Trust, that commitment has a new resonance for the man who signed it. The ashes of Magnus “Ben” Bennedsen now rest in a redwood grove beside those of his first wife Jean and his second wife Margot.

Ben grew up in the Midwest, and for much of his life was a world-travelling, MIT-trained engineer with the Woodward-Clyde Group. The farm in Gordon Valley was the site of Ben’s vigorously active retirement. 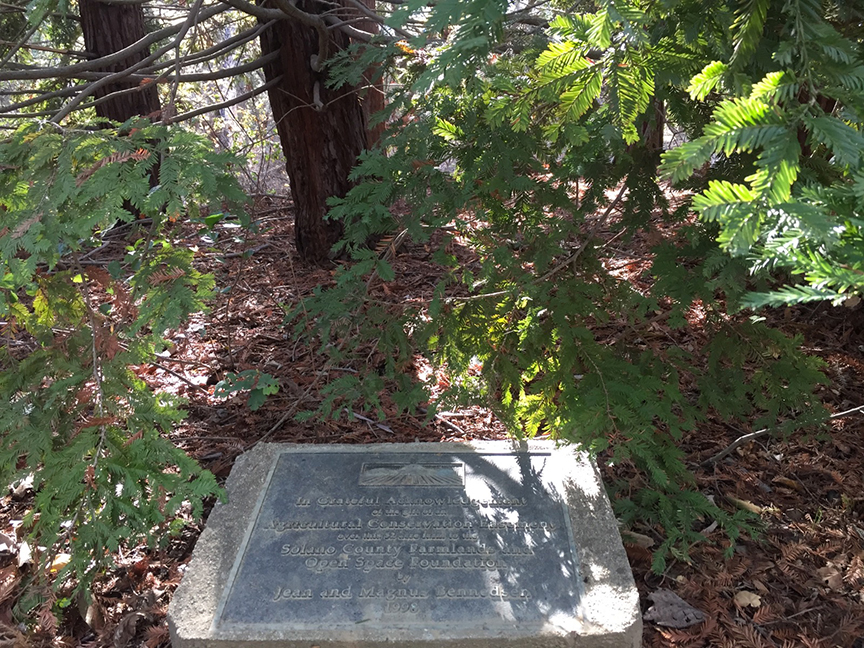 Ben died late into his nineties. He had been living away from the ranch at a retirement community in Southern California. But he’d always known that he would ultimately rest at the ranch, and the forever protection established in 1998 made that assurance possible.

The land Ben conserved is now Tenbrink Farms. It is owned and farmed by Steve Tenbrink, the same farmer Ben encouraged to farm his land decades ago. Steve’s daughter, Lisa Howard, runs nearby Tolenas Winery. Her three children mark the third generation to grow up in the valley.

The Solano Land Trust spoke about Ben with Steve, Lisa, and Ben’s good friend Joe Martinez, who performed the rites Ben requested. They shared their recollections of Ben, excerpts of which have been condensed below.

Joe Martinez, of Martinez Ranches Inc., has been farming in Solano County since 1975. He currently grows almonds, walnuts, prunes, and pistachios. He holds a degree in agriculture from California Polytechnic University San Luis Obispo and has served on the agricultural conservation easement board.

Joe: Ben had a major influence on my life. One of the finest gentlemen I have ever known.

He was a first-class gentleman. Organized, meticulous. He kept track of irrigation—when he started, when he finished. He created a real history—a historical record—on both of his properties. He knew exactly the amount of water he was applying. I learned from him how important it was to do that.

He had a real feeling for the preservation of agricultural land. That we can’t put houses on every piece of farm ground in this state. And he knew we have to have an interface between people in the urban areas and our rural neighbors.

Ben died October 7th. He would’ve been ninety-eight. On Halloween [Ben’s birthday] Ben’s niece and I put some of his ashes at the Dixon Ranch and took the rest down to the Gordon Valley Ranch. The ashes are in a circular planting of Redwood trees, interred in the center of the circle.

I spoke a few words at each place. He instructed me five or six years before his passing that that’s what he wanted done.

I have instructed my family that, when I pass away, I want my ashes on the first ranch in Winters.

The rest I want on the ranch here in Solano County. 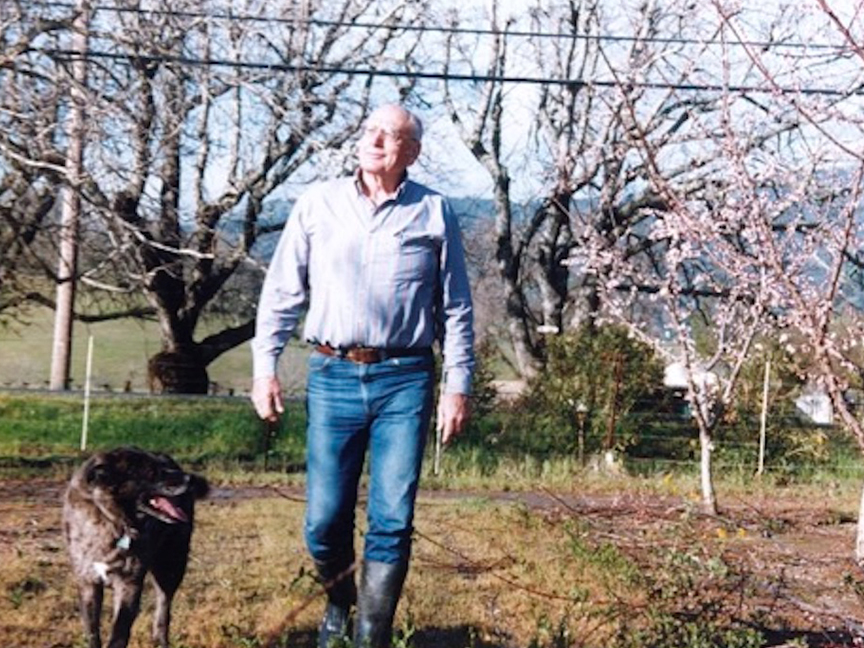 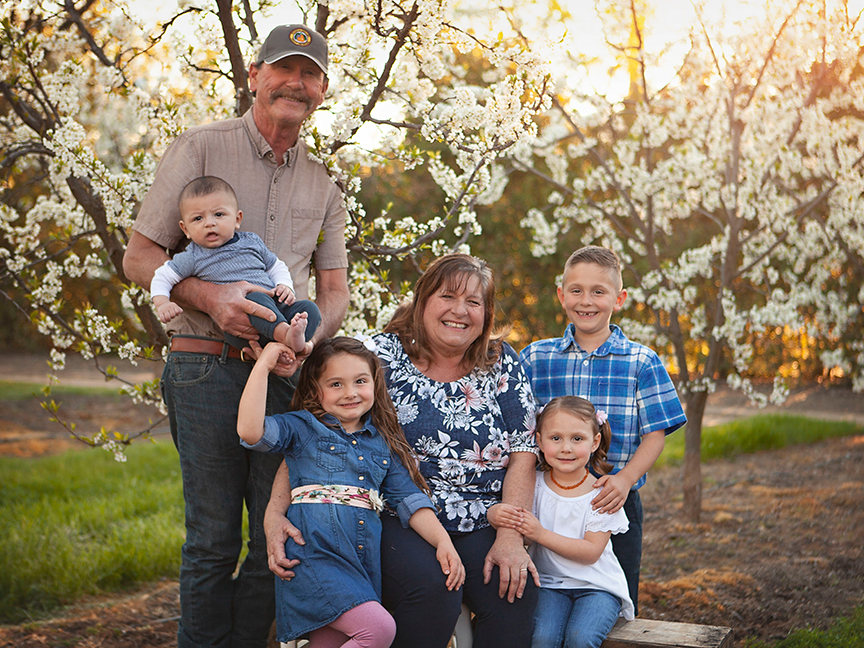 In the 1980s Steve Tenbrink, of Tenbrink Farms, was a grocer in Martinez with dreams of growing his own food. When Steve began farming a five-acre property in the Gordon Valley, Ben began buying fruit from Steve’s stand. The conversation this sparked changed Steve’s life.

Steve: Ben loved agriculture. I remember that when the trees were in bloom, he’d call friends to see how beautiful it was.

He was a hardworking man. Cheerful, happy, energetic. And a very strong man at his age. He was sixty-eight, sixty-nine, out there with a pick and shovel digging holes for the trees.

He told me that when he retired, he didn’t want to be a couch potato, he wanted to put in an orchard and keep busy. And he did.

I have really fond memories of him hanging out in his little picnic area out by the walnut orchard. He’d sit out there and have a picnic lunch and invite me over. Always remember him having a bottle of white wine and a bottle of red wine, and he’d tell me to mix the two together. I never tried anything like that before.

He approached me about the property. He said he was going to put it in a trust and explained that it wouldn’t ever be developed. I said that’s fine with me. I could purchase the property and continue farming.

I’m just thankful every day I wake up that Ben allowed that to happen.

Lisa Howard founded Tolenas Winery with her Husband Cliff Howard in 2015. She met Ben when she was a child in the 199os and enthusiastically identified a picture of Ben from that era.

Lisa: I always remembered Ben as being this gentle giant…with a big smile just like that photo shows.

He saw potential in me I didn’t know that I had. I was good at math and science and Ben was an engineer. So every time he’d visit or see my parents, he’d leave me an MIT alumni magazine. And the next time he visited, he’d ask me what article I liked. So I always read it!

I believe that Ben was the light that guided me to study engineering. Even when I was at Cal Poly, I called him for interviews a few different times for some research projects I was doing. In one of my concrete classes I had to do a report with a registered engineer, and Ben had built bridges and concrete structures all over the world.

Ben really helped my father a lot to get started. The story I was always told was that Ben intentionally put the property in the Solano Land Trust for two big reasons: one, he never wanted it developed, and secondly, he knew it would bring down the price of the property so that my dad could afford to buy it. That always touched me that someone would be so generous, not just to the community but to our family.

When the time came that the property was up for sale, for a great price, it allowed my parents to build that foundation for us kids to come into a working farm that wasn’t hugely in debt, that wasn’t suffering.

To start farming is so hard. When someone decides to put land in a land trust, it allows first-generation farmers to grow their business in a way that’s financially stable.

Now all four of us kids work in the family business. My husband and I have our own business but it’s all interconnected. If my parents only had the first property and Ben didn’t sell the second, maybe the winery wouldn’t exist.

… I always thought it was so neat visiting the Redwood Grove that this property was so special that someone wanted to be laid to rest there. We’ve always said it’s a magical place. It’s touching to know that we get to steward the land for him.

Ben didn’t have any kids, but the reality is his legacy lives on through us.