Today he’s digging up a patch of mature plants and bagging their seed heads. Some plants stand over three-feet tall. Their numerous puffy seed heads bear monstrous resemblance to sunflowers and daisies, two asters related to the thistle.

But the real story lies beneath.

When I ask Mike how deep the taproot goes, his face recalls a sea captain’s remembering a ship encircled by sharks. “Deep,” he says. 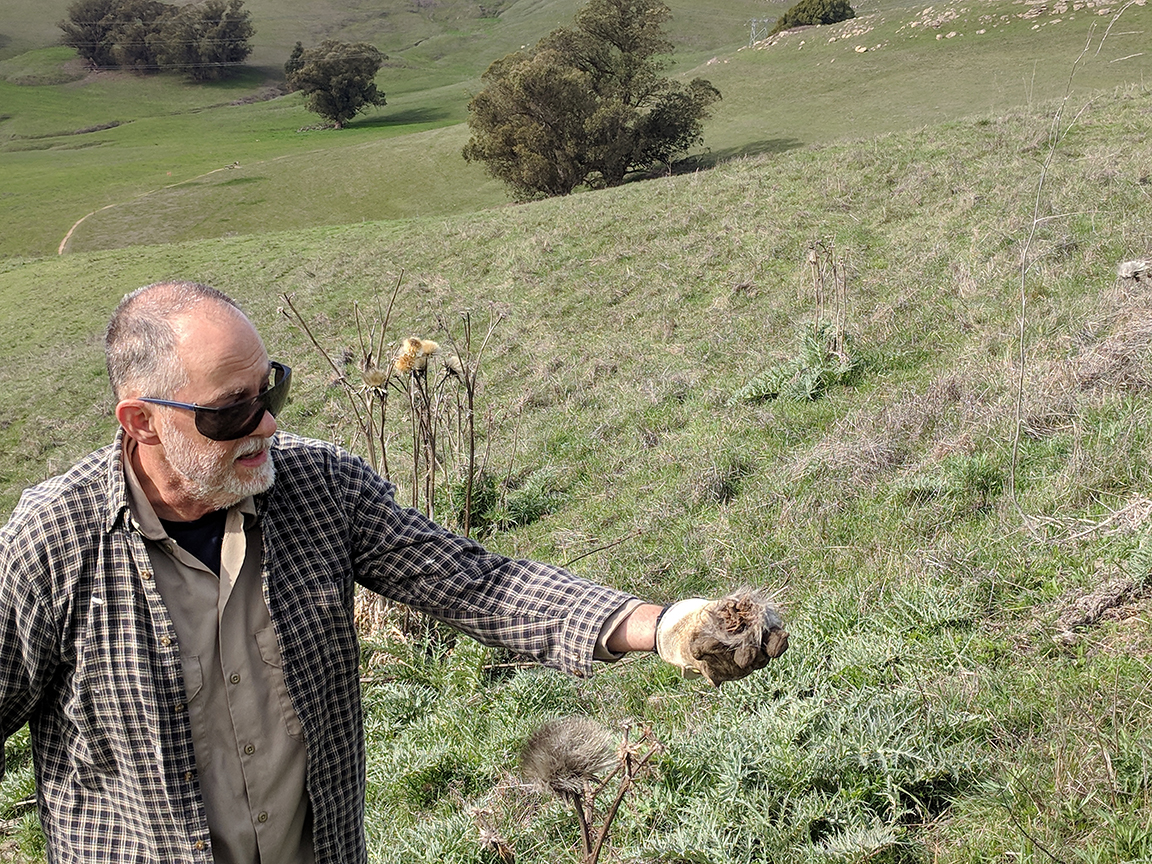 He compares the big taproots to baseball bats. A bark-like coating grows over them, and hefty side roots fork off into the dirt. Thorough excavations leave holes eighteen inches deep, not easily filled with turf.

All this growth starts small and subtly, possibly as a plant you enjoy.

“The thistle that escapes to our rangelands is the same species that we eat, just a different phenotype,” says project manager Jasmine Westbrook Barsukov. “If I had a yard and let one head on one artichoke plant go to seed, those seeds could blow over neighboring open spaces and result in an artichoke thistle invasion.”

Mike’s labors amount to an inspiring story of the good that a committed volunteer can do. But he’d be the first to admit the scale of the issue is beyond him.

Invasive species are busily undermining the productive quality, natural ecology, and scenic beauty of the lands we love. To take a stand requires resources, coordination, and the support of people like you, who refuse to let beloved open space go to seed. 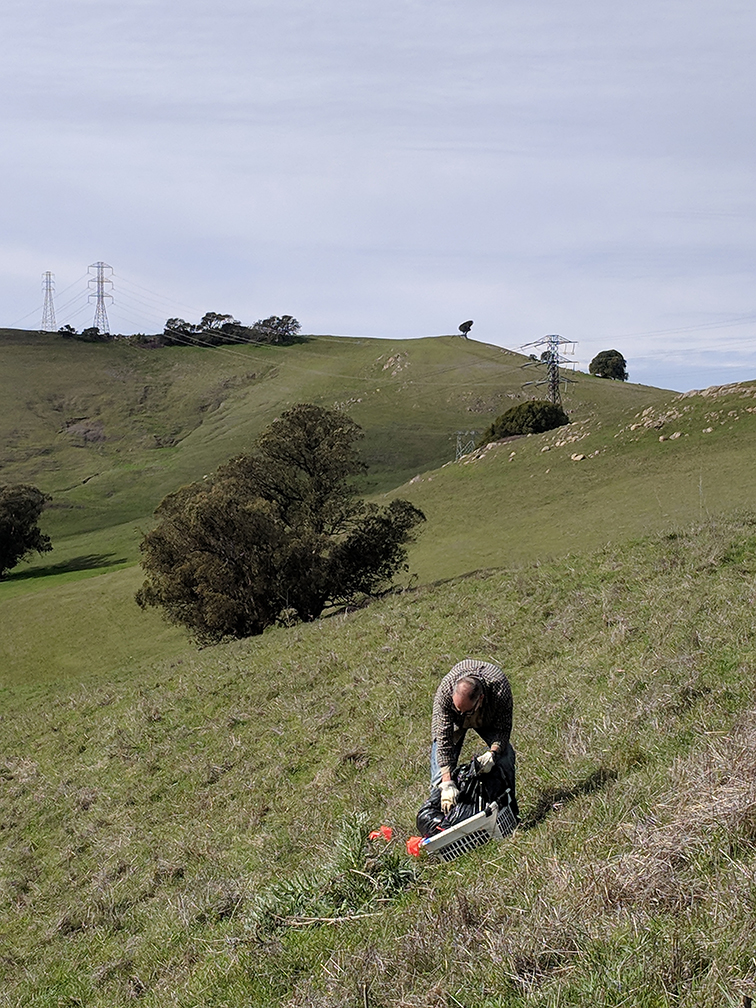 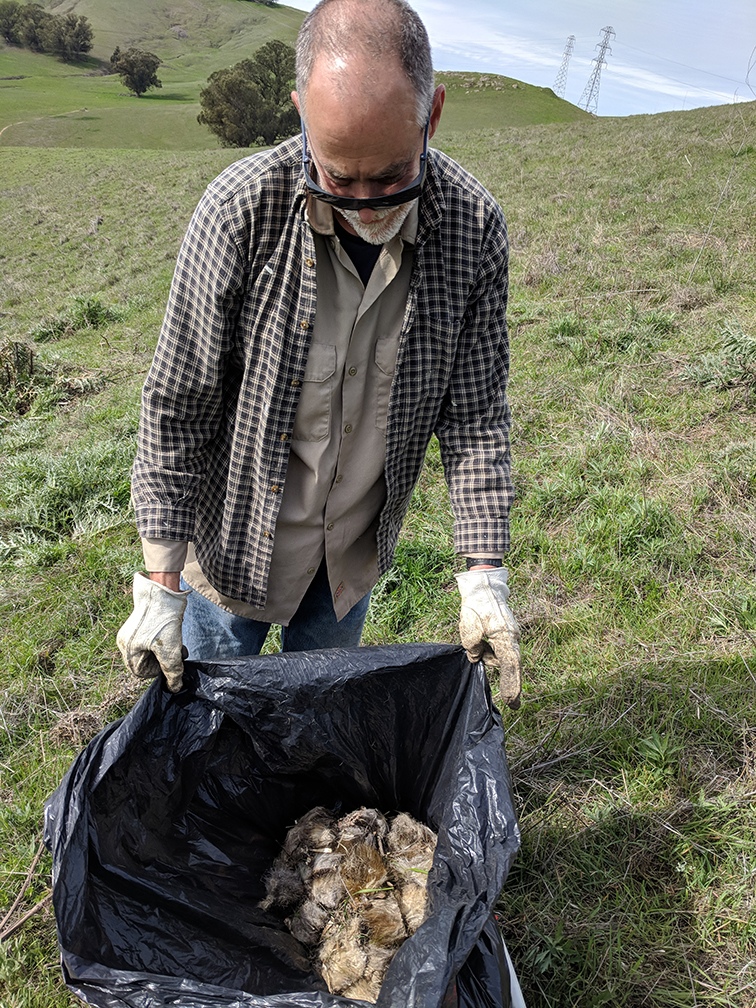 California: Abundant to a fault

California, beloved for its Mediterranean climate, has taken in more Mediterranean and other non-native plants than is ecologically healthy. Brought in for ornamentation or eating, these plants have thrived at the expense of others, and can make a landscape less scenic and accessible. Artichoke thistle infestations can become so extreme, helicopters are required to spray the plants.

Mike’s approach is more ancient, and personal. He digs them up and bags the seed heads.

Mike hails from Florida. He’s an entomologist by training, and he met his wife, Patricia Matteson, while serving in the Peace Corps in Mauritania. The couple lived abroad for years before moving to the Bay Area to care for Patricia’s parents. After years working for the Calif. Environmental Protection Agency, Mike led a very active retirement by taking on specialized volunteer projects at Point Reyes National Seashore—projects that have largely been halted during the pandemic.

It’s unclear if his adventures and expertise inform Mike’s begrudging respect for the plant.

Mike sprays any remaining traces of the plant with a light herbicide and buries the sprayed pieces in the soil. He tallies the number of plants and seed heads. The bagged plants go to a composting facility or a landfill. Sometimes the seed heads can weigh thirty pounds; he claims that he’s seen more seed heads on a plant that the scientific consensus supports.

“How effective is this?” Mike asks. “TBD. I’m confident the plant that came out of this hole won’t grow back, but plants with some roots might.” Mike’s wondered whether removing seed heads alone might lessen the problem, and if a small platoon of volunteers could make an impact. 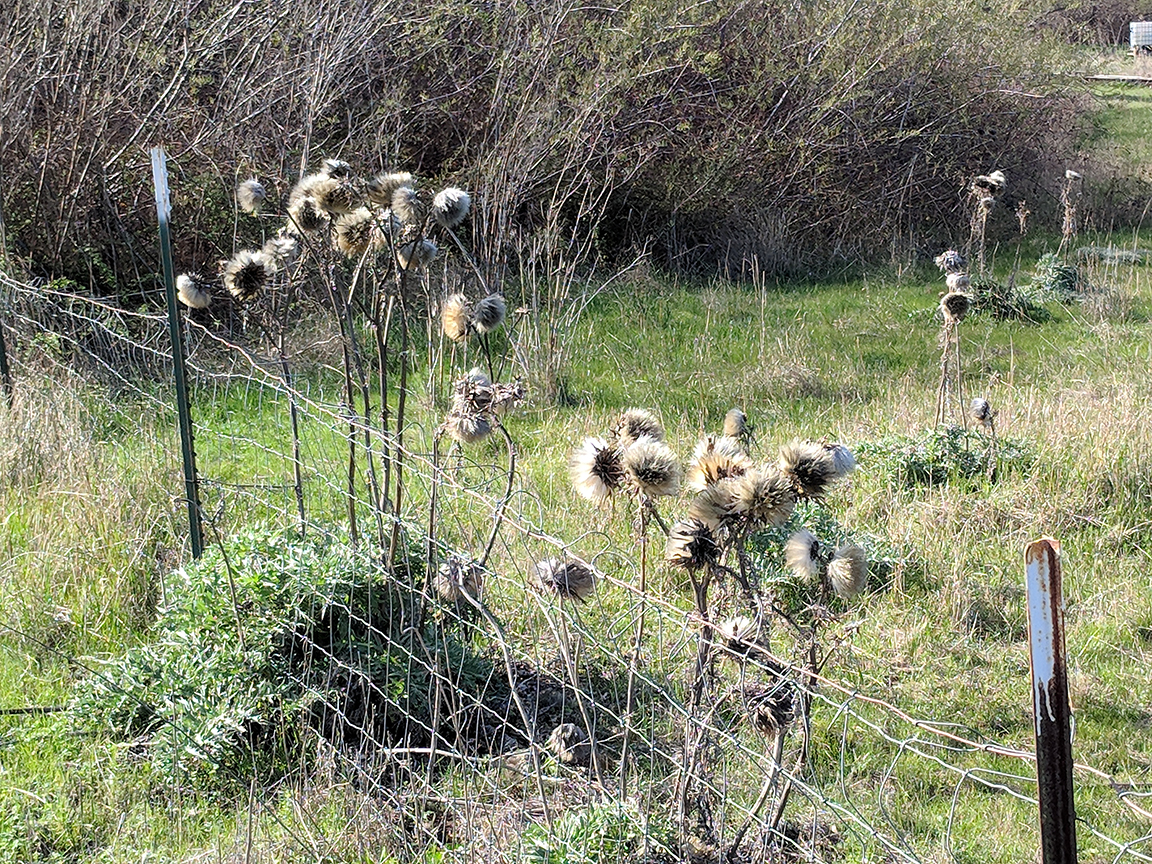 Artichoke thistle growing on local roadsides. “Every flower that doesn't get found and cut releases hundreds of seeds that can travel on the wind,” says Jasmine Westbrook Barsukov.

A mighty effort for a worthy cause

Mike appreciates accessing the property on his off days, with its views of the bay from the granite outcroppings, and the wildlife that teems throughout the property. He got the assignment from field operations manager Jordan Knippenberg, who worked with Mike on many volunteer trail crew projects.

“Eradicating invasive species is not only in line with our mission but part of a contractual obligation to improve habitat, the scope of which is incredibly large and seemingly impossible,” says Jordan. “But improvements to some areas have been very noticeable.”

If you too would like to join a trail crew or pursue a volunteer assignment, please reach out to Jordan Knippenberg at jordan@solanolandtrust.org